You’re probably familiar with the phrase ‘Lead Poisoning.’ Lead is a naturally occurring heavy metal that has been used for Millennium and has many uses even today, such as car batteries, paints, bullets, etc. But probably what lead has been used for the most over the past thousands of years is water supply piping. Surprisingly, a lot of older homes still have some lead piping for their supply water lines. In this post, we will talk about what lead is, how to identify lead piping in your home, and what you need to do if you have lead piping.

What is Lead Piping?

Lead pipes have been used for supplying water to households for thousands of years and were very popular during the Roman Empire Period. Lead’s flexibility and malleability helped the pipes to be manipulated and formed into shapes that could easily supply water into and under existing buildings. Lead is a stable and durable metal that resists corrosion and leaks. Versatility and affordability of lead made it a popular choice for constructing plumbing systems in the United States. Lead pipes are usually found in houses that are made before the 1970s.

Lead can have serious effects on our bodies. We can absorb lead through food, air, and water we drink. Lead poisoning can cause kidney damage and also reproductive problems, which can lead to infertility. It can affect the nervous system and the ability to learn in children. So the main issue with using lead pipes in homes was that it made your drinking water exposed to lead, which eventually caused different health problems.

How Do You Know You Have Lead Piping?

Lead pipes are usually found at the mainline into the home. One of the simplest ways to check if your house has a lead pipe plumbing system is to look near your water meter and see if the service line is lead. Also, if any piping downstream is lead as well. The biggest giveaway that you have a lead pipe is if the pipe swells near a connection point. (See Figure 1, almost looks like an egg.) This happens when the pipe is soldered during installation. Other giveaways are: 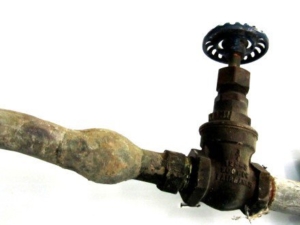 If you find out that your home has any lead pipes, the best solution is to replace that plumbing system. Unfortunately, that can be a costly proposition. Instead of replacing, one can take the following steps to reduce the risks:

What are Galvanized Pipes?

Podcast: The Science Behind Coating Exterior Surfaces That Last with Anthony...
Scroll to top